This post is part of the Fourth Annual Knit and Crochet Blog Week by EskimimiMakes. For seven days in a row, EskimimiMakes issues a challenge: a topic for each day, for knitters to blog about. You can find all the topics here. Today is day 2 of the challenge.

After the Gnomes have initiated me into their secret society, which turned out to be not-so-secret after all, as I got many lovely comments from others initiated into the four Houses, it is time for day two. Entering the Most Esteemed House of Monkey does not come for free, after all. I must now show my dedication to the Great Ape God by planning a craftproject dedicated in His(/Her) honour.*

*As the assignment says: Plan a project you could hypothetically make, no need to actually make it.

This one is going to take some time. It’s not that I have never before dedicated any project to an animal, but I’ve yet to see that awesome chimpansee-purse-pattern I’ve been waiting on. Nor would I feel very comfortable wearing nothing but a Gorilla-hair cloak. So, I’ll have to look for a different solution.

One pattern that I’m completely in love with is Tortoise & Hare Sweater by Kate Davies. Admittedly, there are no monkeys in the pattern (unless they’re hidden very well). That’s why I must make them myself! It’s one of the things that I love so much about crafting: the possibility to customize patterns, and more amazingly the fact that designers don’t mind. Even better, most designers like it when others start with their creations to create something completely new.

Now, creating something completely new isn’t what I’m going to try (not even hypothetically). What I would like to make, all in honour of House Monkey offcourse, is this sweater but with the Tortoise and  Hare replaced with monkeys. Ideally, I’d replace the hare with a gorilla and the tortoise with a Squirrel Monkey. (Fun fact: In Dutch, Squirrel Monkeys are called Skull Monkeys. Isn’t that radical?)

This means I will have to make my own charts.  I have made my own colourwork chart once before, but that time I tried to replicate a garment I had already seen elsewhere. Creating a chart out of nothing is something completely new for me. In a way, this is the perfect ‘ode’ to house Monkey: a project like this would be quite a challenge, but super fun.

And if all else fails? Well, perhaps Mr. Nilsson knows what type of knitwear the Monkey likes? 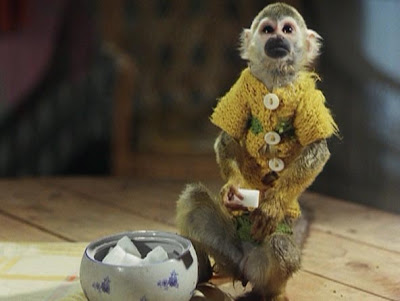 While I’m clumsily drawing charts,
feel invited to tell me what you are making to honour your house!
Leave a comment, or make your own blogpost and use
the code 4KCBWDAY2 to participate in the blog week!

7 thoughts on “A Project for a Monkey? Knit & Crochet blog week day 2”